Posted by Tom Forsythe on Apr 22nd 2020
Olefin continues to be a very popular fiber for low-cost commercial applications. However, it is losing market share to polyester and triexta for the residential market. In years past, carpet cleaners love and hate olefin for several reasons mentioned later in this article.
Olefin, also known as polypropylene, is also used extensively in machine-made area rugs and in both the primary and secondary backing of all types of carpet. Olefin also sees much use in upholstery including automobile interiors due in part to its colorfastness even to UV / sunlight. Considering just carpet face yarns, olefin representing about 11% of the market for 2015 (the latest year statistics have been complied) down from about 40% at the turn of the century. 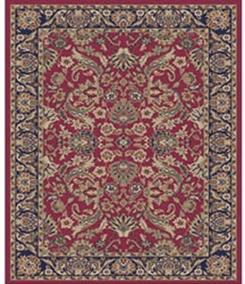 Advantages of olefin face fibers include:


Olefin is the lightest carpet fiber, the only one that Floats in water. It is also the least absorbent of synthetic carpet yarns. This helps with resistance to mold.

Olefin was developed in Italy in 1957, later than many of the popular carpet fibers. US production started in 1960 but it was not used in carpet until late in the 1970s when it quickly became very popular. Olefin became well known in low pile level loop commercial fibers. Later olefin carpet invaded the residential market as Berber carpet with large loops.

Olefin carpet fibers are manufactured by the melt spinning method. Beads of polyester/olefin along with colored pigments are melted and then extruded through a spinneret (like a showerhead) and cooled back to temperatures where the fiber becomes a solid. The color is mixed throughout the fiber which accounts for olefins colorfastness. The process of mixing pigments into the fiber while it is still a liquid is known as solution dyeing.

While manufacturers, retailers, and consumers may appreciate olefin's relatively low cost, carpet cleaners tend to notice that olefin has poor resilience. It tends to mat and crushed down in traffic areas. Sufficient entryway matting along with proper vacuuming and use of a grooming tool can delay this appearance if the carpet owner is consistent in doing this. Olefin is also less abrasion resistant than nylon. So, it displays "traffic lane gray" more quickly.

Olefin does resist water and water-based stains but it has an affinity for oil. Not surprising since petroleum is a major component in the production of olefin. Tracked in oils from asphalt driveways or sidewalks, oils dripped in parking lots, cooking oils that fall from the air onto olefin fibers, food cooked in oil, and dropped on olefin carpet are just some of the sources of oil and grease that end up on olefin fibers. This oil can become permanently bound to the fiber if not cleaned at regular intervals. The oils oxidize resulting in yellow or brown discoloration. You may have noticed a yellow path leading in from the front door of a commercial establishment showing of the major traffic flow pathways and giving an indication that the carpet face yarns are olefin.

Olefin also has a low melting temperature. Although it is unlikely that melting temperature would ever be reached during the cleaning process, hot hoses and especially quick connects can get olefin hot enough to soften and leave an impression. The heat of friction when sliding heavy furniture can produce enough heat to melt or discolor the tips of fibers.

In commercial settings, consider encapsulation cleaning with a counter-rotating brush machine (CRB) or an oscillating pad machine (OP) for interim cleaning and maintaining a high appearance. HWE should be done at 6 to 12 month intervals depending upon the nature of the soil and the level of soiling. Water-based soil will release rather easily. Greases and oils will be problematic, especially if cleaning is not done frequently enough.

Particulate soils can also be an issue when cleaning dense loop pile in high traffic areas. The tracked in soil can get heavily impacted or "buried" under the fibers where it is hard to remove by vacuuming or extraction. The proper prespray and plenty of flushing/extraction are helpful. We suggest a balanced high alkaline when oils are the main problem and surfactant-based prespray when high levels of particle soil are the greater concern. Use the rinse of your choice as neutralizing the alkalinity is not as necessary as with nylon.

Wicking is another issue more common with olefin face yarns. Consider following HWE with quick encapsulation cleaning in areas with heavy traffic or lots of spills or simply a spray application of anti-wicking soil-resistant polymer-based protector.