Clearing up Common Misunderstandings Between Enzymes and Bacteria

There is much confusion in our industry between enzymes and bacteria. For example, products use enzyme in the name when the product actually contains only bacteria.

Bacteria used in our industry are naturally occurring and are added to liquid products primarily for diverse tasks, which generally include extensive contaminants; whereas, enzymes (produced by bacteria) are used to break down and digest the organic material (source of odor) where time is less important.

Enzymes
An enzyme is not living, but rather, a catalyst created by bacteria, which is a living organism. There are more bacteria cells than tissue cells in our body. Enzymes enhance cleaning action in all types of formulas, but they are very narrow in what and how much they clean. Different enzymes include Protease for proteins, lipase for lipids, amylase for starch, etc.

Depending on the soil load, you would have many situations in which an enzyme would contribute nothing to the cleaning because the correct enzyme was not in the formula or there was not enough of the enzyme to complete the task at hand. Residual enzymes are likely to be a result of almost any soft-surface cleaning, which results in potential exposure and triggers asthmatic reactions. In short, the enzyme is finite and limited in scope but will almost always result in residual enzymes when the amount and/or enzyme choice is subject to arbitrary decisions. 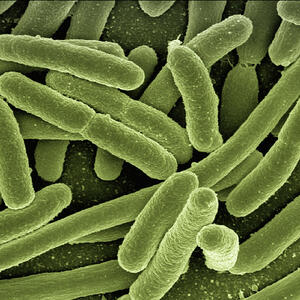 Bacteria are single-celled, living organisms that identify an organic food source. In a collection of wide-spectrum bacteria, that identification produces the correct enzyme in the right amount to digest that food source and future odors. It is an efficient enzyme factory since it selects the right enzymes and stimulates cell growth so that enough of that enzyme is produced with no leftover or allergic concerns. The bacteria then return to spore form, awaiting the next contact with an organic food source.

The primary weakness of bacteria use is time, as it can take a while before enough bacteria cells are formed to create enough enzymes to complete the task. The sub-division or multiplication, known as binary fission, happens every 20 to 30 minutes under ideal conditions. However, once the bacteria strains are established, they will continue to work until their food source runs out, eliminating future odors.

In the marketplace, you will find many bacteria- or enzyme-containing products with a variety of price points. The reason for these price differences depends on the complexity of the formula (like the enzyme or spore count), the quality and variety of the enzymes or bacteria strains (you can add individual enzymes to a bacteria strain), and the other ingredients added to the formula. Some formulas will only have water, bacteria, and surfactant. Others will also have an odor encapsulate, fragrance, and non-resoiling polymers, which can add significantly to the cost. Simple formulas cost less and do less than complex formulas.

The bacteria spore count needs to be at a high enough level to be dormant in the bottle. Some products have the maximum number of bacteria (and nothing more) to be dormant so that they can be activated by water in a cleaned carpet. This allows the maximum active bacteria so the product starts working at the highest level to accomplish its task in the shortest amount of time. Other products have a higher spore count so they must be diluted with water before becoming active.

Understanding the differences between enzymes and bacteria can help the cleaner to predict the potential results, the appropriate time frame necessary for the job to be completed, and any potential health issues. In my opinion, it is great to use a product that multiplies as it is used, which creates more enzymes than could ever be packaged in an enzymes-only package. It is beneficial to use a product that identifies the right enzyme in the right amount to complete a job leaving no residual enzymes. It is also good to use a product that reverts some of the bacteria into a dormant spore phase that can be activated in the future when contamination happens again.