Controlling odors can be complex. There is no ONE way or ONE product to “do it all”.

Humidity, temperature, and ventilation all affect how we perceive an odor. Offensive odors can be more noticeable in winter because homes and buildings are closed up with less ventilation. However, humidity and temperature make certain odors more obvious (think of wet dog). Temperature and humidity may be higher in summer. Cleaning may be the source of increased humidity. Odors that show up during or right after cleaning, maybe significantly less once humidity levels return to normal.

What makes an odor offensive? Sensitivity is quite often just the result of an odor being introduced into an environment that makes it smell different than “normal.” Acclimation is the process when, after some time, an individual can become accustomed to an odor.

Anything that the client deems as such!

What kinds of problems make up odor control jobs? 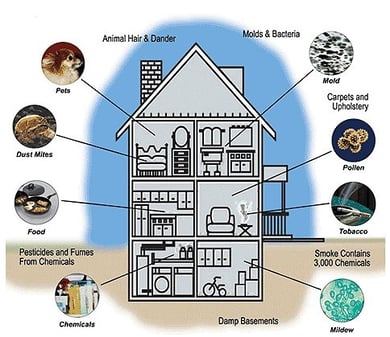 Deodorization may be accomplished by several methods including cleaning to remove the source of the odor, chemical products to decompose or break down organic odor sources, chemical products to capture or modify odor molecules so they don’t reach our noses, or products that seal in odors. Deodorization may also be accomplished with specialized equipment. Frequently the best approach is a combination of methods.