You have probably seen it as you enter customer homes and businesses to clean carpet. More and more homes and prestigious commercial accounts are in need of maintenance help with stone floors, countertops, walls, fireplace mantles, and other surfaces. Although carpet and natural stone are very different, you have already made it through the door and your company has already begun a relationship with this customer. Instead of walking over and around surfaces that can easily generate revenue to get to the carpet, it’s time to capture this additional revenue. We want to help you get ready to tap into this market.

The need for proper stone or tile maintenance begins almost immediately after a floor is installed. New floors, countertops, and other surfaces need to be sealed before they are put into use. This is true even for surfaces that may not be thought of as porous. Almost every stone surface will benefit from protection. Stains that penetrate unsealed grout will be difficult or impossible to completely remove later on. Common foods and beverages can etch or stain even seemingly impervious marble or granite countertops.

Sealing a stone or tile floor is usually done a day or two after installation. Most installers do not want to make a second trip to a job site to do the sealing. They have another floor to install. That opens a door for you to offer this simple, but necessary and profitable service. Work with flooring retailers and installers to finish the job.

Knowing the type of tile or stone is critical to success, especially during restorative cleaning. Using the wrong products can result in the need for heavy restoration or even replacement, but this is easy to prevent. There is a growing number of vinyl tiles, planks, and solid core flooring that closely resembles tile or stone but is not. Take the time to be sure you understand what surface you are preparing to clean.

Ceramic Tile
Ceramic is a broad category that includes all tile that is made from clay and other non-metallic minerals. In general usage, “ceramic tile” is used to describe tiles that don’t fall into one of the subgroups below. Most ceramic tile goes through a process called “firing” at high temperatures. 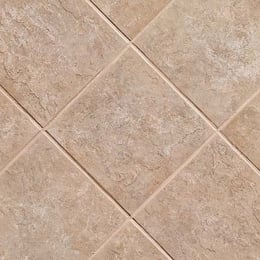 A key advantage of ceramic flooring is its durability. Ceramic is resistant to alkaline, acids, and solvents used in cleaning. Ceramic’s abrasion resistance keeps it from being scratched by gritty soil underfoot if the grade of tile matches the situation in which it is used. Ceramic flooring is available in a wide variety of styles, colors and patterns.

Porcelain
Porcelain is a high-density ceramic tile made from special clays fired at extra high temperatures making it even more resistant to abrasion. One qualification to be called porcelain is that the tile must absorb less than .5% of its weight in water.

Quarry Tile
Quarry tile is fired at 2000°F or higher. The common dark red color comes from the minerals in the clay body. Other colors can be produced by a selection of clay or adding pigments. Normally there is no glazing or pattern added.

Brick pavers are another type of clay tile similar to quarry tile. They have a rougher texture and often are cut to size so that the floor looks as if it was paved with bricks.

Saltillo and other Terracotta Tile
True Saltillo tile is produced from clay that is found only in Saltillo, Mexico. Similar tile that is produced elsewhere may be called Terracotta or “Saltillo style” tile. This tile is made with a low degree of automation. As a consequence, the tiles may not be exactly square or flat. There will
be color variations. Some tiles may exhibit chipped or uneven edges, craters on the surface, or even animal footprints. 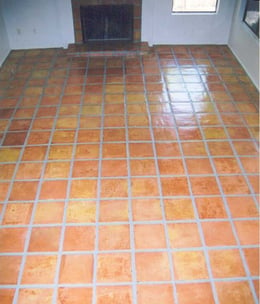 Stone ID
Knowing what kind of stone you’re working on determines what type of cleaners you will use.

Sedimentary stone is formed from small bits of weathered stone, marine organisms, or minerals dissolved in water that form layers and under pressure become sedimentary stone.

Like the caterpillar that changes into a butterfly, the metamorphic stone has been changed from one form into another. The change comes from increased heat and pressure as well as the introduction of new minerals into the mixture.

The color may change. The texture may change. Under sufficient pressure, the mineral can take on a crystal structure. The presence of small amounts of other material is responsible for color variations. As an example, a diamond is metamorphic carbon that has taken on a crystalline structure. The sedimentary form of carbon is coal.

Formed by molten material deep in the earth known as magma, igneous stones are classified into one of two groupings.

Extrusive rock starts as magma that exits from the surface of the earth, comes in contact with the cool ground and much cooler air. The stone hardens quickly leaving little time for crystals to form. Extrusive igneous rock exhibits small crystals.

Intrusive rock is formed when the magma is trapped below the surface of the ground. It cools more slowly and forms larger crystals. The most igneous stone used as a flooring material is the intrusive variety.

In addition to being classified by how the stone was formed, stones can be classified by the major mineral content. Calcite stone contains calcium carbonate which is similar to Tums you may swallow to reduce stomach acid. Silicates contain mostly silica or sand.

Granite is an igneous stone and the hardest commonly used stone for flooring. It is popular for countertops. A wide variety of colors and patterns is possible. Some patterns have prominent veins of colors while other varieties show little or no veining. Significant variation in porosity and thus ease of staining exist.

Marble is a metamorphic stone that contains calcium carbonate. It can often be identified by veins of color running through the stone. Marble will take a high polish resulting in a highly reflective shine. Marble may also be finished by honing to a flat dull shine or tumbling to a soft finish with worn and rounded edges. 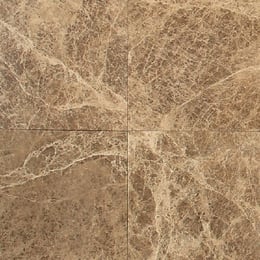 Limestone is a sedimentary rock containing calcium carbonate. It is commonly finished to a smooth but dull surface by honing.

Travertine is similar to limestone in that it is sedimentary and is largely calcium. However, travertine contains voids in the surface that may be filled by plastic resins or grout. Over time such fillers may come out allowing the voids to be filled with soil.

Sandstone is a sedimentary rock formed by particles of weathered rock and sand.

Flagstone is a general term that can include several types of stone, usually sedimentary varieties.

Serpentine is sometimes classified as marble because of the high shine it can take on. However, it is actually an igneous stone and does not contain calcium. Serpentine often has a predominant green or bluish-green coloration. 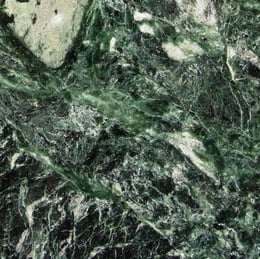 Slate is a colorful metamorphic stone showing a fine-grained structure containing tiny crystals. It is composed of shales and clays rather than calcium carbonate. Slate has a sheet-like or layered appearance known as foliated. 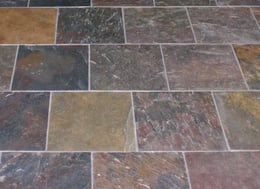 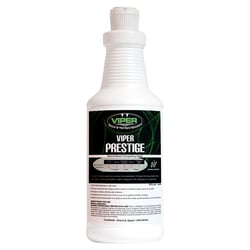