Powdered Enzyme Pre-sprays or Pre-sprays with Enzymes: Which Type Is It?

Enzymes enhance cleaning action in all types of formulas, but they are very narrow in what and how much they clean. Different enzymes include: protease for proteins, lipase for lipids, amylase for starch, etc.

Protease is the typical enzyme added to powdered pre-sprays and aimed at protein soils. Depending on the soil load, you would have many situations in which an enzyme would contribute nothing to the cleaning because the correct enzyme was not in the formula or there was not enough of the enzyme to complete the task at hand. In short, the enzyme is finite, limited in scope and subject to arbitrary decisions by the formulator and user.

We need to understand the difference between an enzyme and bacteria. An enzyme is not living, but rather, a catalyst created by bacteria, which is a living organism. Enzymes can be created in manufacturing under lab controlled standards. They are processed and can be sold as liquids or powders. We also need to know how an enzyme works. A representative of a primary supplier stated simply: “Enzymes are like a knife and fork. The knife and fork represent the enzymes, which just break or cut things into smaller pieces and move on to the next food source. A bacteria product on the other hand recognizes the type of organic to be removed, produces the knife and fork, and then degrades it naturally once it is broken into smaller pieces by absorbing it through the cell wall.” 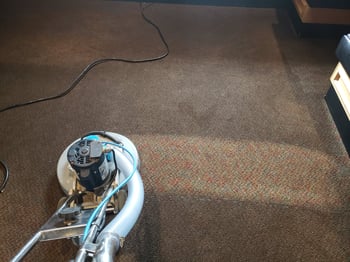 Generally, most of these powdered enzyme pre-sprays are built well enough to be good cleaners without relying on the enzymes. In my opinion, enzymes are not allowed to do that much in powdered pre-sprays based on their typical use. This is important as many cleaners do not follow the rules to maximize the impact of enzymes in cleaning. Most cleaners do not give enough dwell time to allow the enzymes to complete their work. Also, enzymes work best at moderate pH and moderate temperatures which is more the exception than the rule.

Therefore the other ingredients are generally more important than the enzymes. The primary builders used are sodium tripolyphosphate and sodium carbonate. Sodium carbonate costs X, and STPP 4X. Generally, if you do not use STPP in your powdered formula then it will cost a lot less. The use of STPP in a pre-spray significantly increases the free rinsing of said pre-spray. The higher the pH, the less STPP is used. In my opinion, if you use hard water then you will want a pre-spray to have phosphates so you will get better rinsing as the hard water severely limits the availability of phosphate in the extraction rinse to do its job. Secondary builders are added to modify pH. Monosodium phosphate and sodium bicarbonate are used to lower pH and sodium metasilicate to increase pH. Non-ionic surfactants and solvents are necessary to boost oil removal characteristics and work well in variable levels of heat and pH.

Over time some products have reduced or removed enzymes without losing performance and/or market share. Powdered enzymes are expensive and some believe that upgrading other ingredients with a transfer of the cost of the enzymes is a wise formulary decision. This move makes sense as traditional extraction cleaning processes are not adjusted to maximize the conditions for optimal enzyme choice or performance. The result is that the marketplace is dominated by carpet pre-sprays with enzymes.