Series or Parallel? An In-Depth Look at Vacuum Configurations.

What is the Difference Between Series and Parallel Vacuum Configurations?

If you’ve been a carpet cleaner for any length of time, you’ve probably read or engaged in discussion on the industry forums about vacuum configuration that sound something like an argument over whether Ford is better than Chevy.

Some cleaners feel very strongly that they get the best water recovery when cleaning with their vacuums in a series configuration, while others swear that the high air flow (“CFMs”) they get from a parallel set up provides them with better dry times. Which is right? Well, like any good politician, I’ll say “It depends.”

Put simply, vacuum is the absence or reduction of molecules in a defined space. The fewer molecules you have in that space, the greater your vacuum. Since molecules in the air flow towards areas where there are fewer molecules, an opening in a closed vacuum system will cause air to rush in. This movement of molecules from a crowded space to a less crowded space is referred to as a “concentration gradient”. A vacuum motor reduces the number of molecules in a defined space, and air from the outside, which has a greater concentration of molecules, moves down the gradient to replace the lost molecules. The pressure is equalized as air moves from an area of high pressure to an area of low pressure. 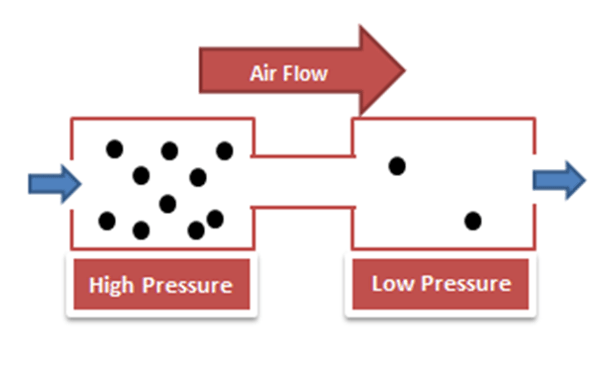 In our industry, we use the terms air flow (CFM) and lift (inH2O) to measure performance of a vacuum motor.

Air Flow is the measurement of air per unit of time that flows through the item you’re measuring. For our discussion, it would be the amount of air flowing through the vacuum motor opening. We measure volume using cubic feet per minute (CFM).

Both Air Flow and Lift are required for efficient vacuum. Whether you should be trying to get more air flow or more lift depends on your particular needs.

Lift (inH2O) and Air Flow (CFM) are affected by a number of things, but the main contributors are:

1 and 2 are intuitive and mentioned elsewhere, so we’ll focus on the size of the opening, or orifice, where air can enter the system. Essentially, as your orifice (opening) gets larger, your air flow increases, but your lift decreases. As your orifice gets smaller, the reverse is true.

This opening can change based on the tools you’re using. For example, some cleaners use 2” vacuum hose, while others run 1.5” vacuum hose. Those who use larger vacuum hose will have more air flow, but less lift. Your wand or other tools also affects this. Are you using a tile tool, a 12” or 16” carpet wand, a wand glide with a row of holes? All of these will increase or decrease the size of your effective opening and change how your vacuum motor performs.

Let’s look at a household vacuum cleaner. Since the manufacturer is trying to hit a very low price for home owners, the motors used in these vacuums aren’t very powerful. To overcome this, the manufacturer uses hoses with smaller diameters; 1” to 1.25” to overcome the lack of air flow. If the hose extension on a home vacuum cleaner was 3" wide it wouldn't pick up any of the crumbs off your floor since it wouldn't have the needed "lift".  The same is true for vacuums in the carpet cleaning industry--at some point, the opening can't get any larger or the wand, tool, etc. wont pick anything up.

What’s happening here? You haven’t added another vacuum motor, or even increased the amount of available electricity, yet you’re able to pick up heavier items when you decrease your opening size. A smaller opening helps to increase the air velocity and lift, and makes it possible to pick things up that a larger opening could not pick up. A wand glide does the same thing. It reduces the size of the effective opening, which increases the lift and increases the velocity of the air.

Remember our concentration gradient from earlier? By default, Nature wants to equalize the pressure, but to do so, the air now has to travel faster to get the same volume through a smaller opening.

The graph below comes from an Ametek-Lamb vacuum motor. Notice how air flow and lift change dramatically with small changes in the size of the opening. 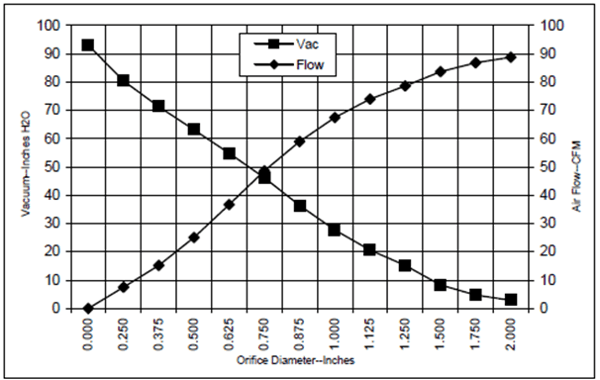 Ametek-Lamb vacuum motor performance chart. Air flow increases and lift decreases as the opening gets larger.
An orifice diameter of .75" is where the lines intersect and is also where vacuum performance (air watts) is maximized.

A parallel configuration is one where different air molecules enter two vacuum motors simultaneously. In other words they travel through one motor and then leave without traveling through the other motor. Splitting the two vacuum motors up allows you to move more air, so your CFM increases. In fact, the parallel set up allows you to double your air flow, but you don’t get much increase in lift. 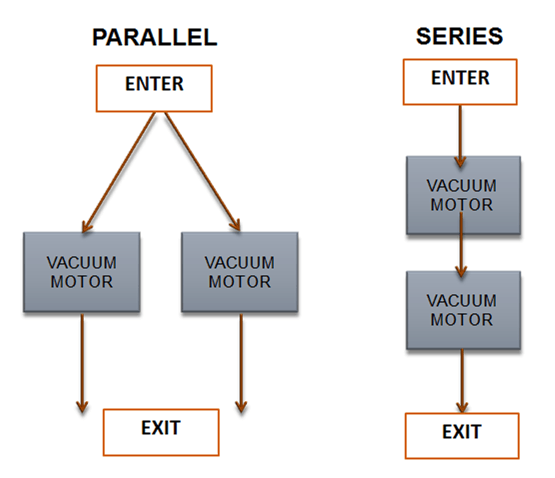 Let’s take a look at what is happening to the air molecules in our vacuum system.

If you look at the series set up, the first one moves eight at a time; however, the second vacuum motor is not exposed to open air, so it is not moving any new molecules, it is just moving the ones that were found in the vacuum motor placed before it.

Thus, the parallel configuration moves twice as many molecules, or in every day vernacular has double the air flow.

In the beginning of this article we talked about the definition of a vacuum and how vacuum is caused by the absence or reduction of molecules in a defined space. You’ll notice that the second vacuum motor in a series setup has a reduced number of molecules compared to the vacuum motors in a parallel setup. This is because it is pulling air from the previous vacuum where there aren’t as many molecules as found in ambient air. This leads to greater vacuum (more lift) in the second motor, which increases the total lift of the system.

So what’s an air watt and who cares? An air watt is the only standard recognized by the American Society of Testing and Materials (ASTM) for measuring a vacuum’s effectiveness. Air watts are what all the major vacuum motor manufacturers use to determine how powerful their vacuum motors are. Referring back to the Ametek-Lamb vacuum motor graph, air watts are maximized at the intersection of the air flow and lift curve. For this particular vacuum motor, that occurs with a diameter of .75” inches. Air watts are calculated by multiplying the actual lift and air flow numbers at a particular opening size and dividing them by 8.5.

It’s important to understand the concept of air watts, because while you maximize your air flow with larger diameter vacuum hose, you are killing your lift. Experience tells you 2.5” vacuum hose on a portable isn’t going to be ideal, and the air watt equation above tells you why mathematically – you would have no lift.

At the end of the day, different objectives will require different tools. Picture an air purification system in your house. The job of the purifier is to clean as much air as quickly as possible. It accomplishes this by using a large opening(s) to maximize the air flow (CFM). If the opening to the purifier was the size of a straw, it would be very inefficient at removing particulates from the air because there wouldn’t be enough air flow.

Now, remember the home vacuum example. The extension wand narrows towards the end. This smaller orifice increases the velocity of air entering the wand and improves vacuum. If you were to open the end of that wand up to 3 inches, you wouldn’t be able to pick up your kid's cookie crumbs.

SO... SERIES OR PARALLEL?

Now that you understand the difference between series and parallel, which one should you use?

If you're extracting water, the choice is easy. You should always run a series configuration for 2 reasons: 1) your effective opening is very small. The tool that you will use, a Water Claw or carpet wand, will be submerged, or nearly submerged in water and will be very small. If you recall, lift (series configuration) performs better with a small opening, and 2) you are lifting something heavy (water) and series will always lift heavier and higher than parallel.

If you're cleaning tile with an SX-15, we recommend a parallel configuration because 1) your effective opening (the bottom of the tool) can be large due to gaps in tile and the vacuum break is usually open to allow for easy movement, and 2) the increased air flow helps dry the floor faster.

For carpet, we tested both configurations with a Nautilus Portable Extractor and an AW29 carpet wand, which has a 12" head and 1.5" tubing, and found that the differences weren't as pronounced as the above two examples. Either configuration worked well, with only a small, 3-6%, difference in dry times.

What is your preferred configuration, and for what applications? Let us know in the comments below.