The Amazing Silkworm - Once a State Secret

You undoubtedly know silk as a lustrous, highly valued fabric used in rugs as well as beautiful garments and other fabrics. How familiar are you with the production of silk?

In ancient times, the production of silk was a closely guarded secret known only in China.  Sharing the secrets of silk production or taking silkworms out of the country was a crime punishable by death.

China successfully guarded this secret for a long time. Some accounts place the beginning of the Chinese silk industry back to 2640 BC. A few silk related artifacts have been dated as being around 6,000 years old.

The secret to silk production may have reached Korea around 200 BC. India was growing the silkworm also shortly after 300 AD. However, the secret of silk production did not reach the west (Europe) until 552 AD.

There are hundreds of species of silkworms, but only four produce silk for commercial applications. The highest quality silk is produced by the Bombyx mori. 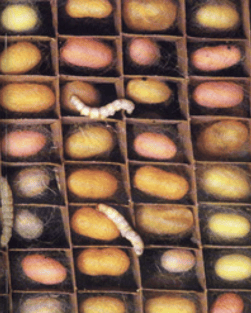 The process begins when the female moth lays up to 5000 eggs the size of a pinhead. After 20 days, the eggs hatch and the worms begin eating. They eat mulberry leaves continuously for about 18 days, and from that produce about 2 pounds of raw silk per worm. By the end of this eating process, the worm will have multiplied its weight 10,000 times!

The raising of silkworms is a process that is not an easy task and is a process called sericulture. After this feeding process, the silkworms now have turned translucent. They are ready to be placed in boxes with a small cubicle for each worm, this is where they will spin their cocoons.

The pupa in the cocoon must be kept at the proper temperature. They need to also be protected from drafts, loud noises, and even odors. These can affect the health of the silkworms and the quality of the silk.

All the eaten mulberry leaves are being converted to a protein called fibroin during this cocoon process. The caterpillar pushes the fibroin through two glands, one located on each side of its body. The fibroin is coated with a gummy substance called sericin as it exits from the spinneret located near the worm’s mouth. This dries upon contact with the air to form one filament.

A moth would be ready to emerge from the cocoon in under two weeks. However, the pupas (worms) inside must be killed before they emerge and break the threads. This is usually accomplished by heat or steam.

With all the fibers stuck together, how is it unwound? History credits the princess His Ling-Shi with the invention of the process known as reeling. She noticed something strange after a cocoon that had fallen into her cup of hot tea. While retrieving it she noticed the delicate silk fibers were coming apart.

The process today is done in a very similar process as the hot tea. The cocoon is placed in hot water or steam to loosen the filaments. The edge of the filament is caught on a brush and the silk cocoon is unwound on to reels. Several filaments of silk will be combined to form a single yarn.

Silk either can be dyed as yarns, or skeins after it is made into fabric. The molecular make-up of fibroin results in both positive and negative ions which act as dye sites. A variety of different dyes are attracted to the fiber and bond to the dye sites. The fibroin allows the dyes to penetrate deeply resulting in excellent colorfastness. The silk can now be woven into scarves, garments, or beautiful rugs.

Plain silk fibers are woven in a variety of weights to produce blouses, shirts, scarves, and fashionable women’s clothing.

Chiffon fabric has some of the sericin remaining. It also has a very high twist. The texture will still be soft and smooth but a slightly more grainy texture than plain silk.

Matka is a thicker fabric used in upholstery and as the warp and weft yarn of rugs. By using multiple yarns both the thickness and the texture of the fabric can be controlled according to the desired result.

Habutai fabric has no twist. The result is a very smooth fabric.

Other types of silk include Organza, Satin Silk, Tabby Silk, and Murshidabad.

The Qualities of Silk 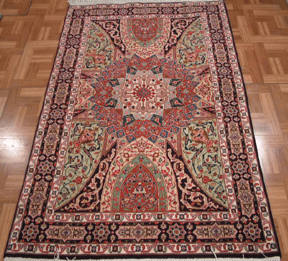 Luster – The elegant luster of silk is due to the multi-layered, prism-like structure of the fibroin, which diffuses light.

Strength – Silk has a tensile strength equal to steel but has poor resistance to abrasive forces.

Breathable – Like many natural fibers, silk can feel cool in hot weather and warm in cold weather. Tiny voids in the fiber absorb moisture and allow perspiration to pass through.

Gentle to skin – The amino acids that make up the protein fibroin are gentle to the skin.

Flame Resistant – Like wool, silk does not burn easily. It tends to self-extinguish. It will not give off toxic fumes in the event of a fire.